Susan is a graduate of the University of Michigan, where she studied piano with Charles Fisher and Gyorgy Sandor. As an undergraduate, she was privileged to be rehearsal pianist and choral assistant to the great conductor Maynard Klein, whose example as an emotionally communicative and humanistic musician continues to inform and inspire her work. Upon graduation, Susan joined the University Music School as a staff accompanist, and was highly in demand as recital and masterclass pianist. Surprising to many, during this time she also received a secondary degree in biochemistry and was part of a research lab whose work eventually laid the foundation for the first effective AIDS treatment.

Susan joined the piano faculty of the Brattleboro Music Center in 1983, and also served as rehearsal assistant to Blanche Moyse. She became Director of the Brattleboro Concert Choir in 1989, and served in that position until 2018.  During her tenure, the chorus doubled in size and became one of the finest auditioned choruses in New England. She directed the Marlboro College Chorus from 1994 – 2002 and was founder/director of the Bach Festival Children’s Chorus as well as the VT Repertory Singers.

In addition to her work at the BMC, Susan is co-founder and director of Winged Productions along with her husband Paul; and founder and director of The Choir School programs for young people.  A long time church musician, Susan has served as  Director of Music at St. Michael’s Episcopal Church since 1991. Both as a pianist and choral/vocal coach, Susan’s approach reflects her commitment to creating meaningful musical communication, and building solid musical skills based on a healthy physical technique.  Susan is an avid gardener and cook, and she and her husband live in an 1830 farmhouse in Williamsville, VT, where they grow enough vegetables to feed the entire village. 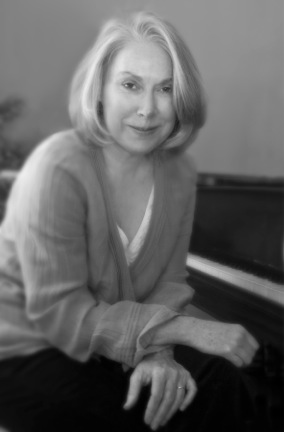 s Fisher and Gyorgy Sandor, and was choral assistant to Maynard Klein at the University of Michigan, where – surprising to many – she also received an undergraduate degree in biochemistry.

Upon moving to Vermont, Susan joined the piano faculty at the Brattleboro Music Center and subsequently became Artistic Director of the Brattleboro Concert Choir. She has been director of chorus at Marlboro College, founder and director of the VT Repertory Singers, Winged Voices, the Jubilee Girls Choir, the Bach Festival Children’s Chorus, and is the director of music at St. Michael’s Episcopal Church in Brattleboro.

Susan credits three choral conductors with guiding her career development:  high-school choral director David Wikman, who introduced her to early music; college mentor Maynard Klein (director of University Choirs at the University of Michigan), who taught her that music was an act of love; and Blanche Moyse (Artistic Director of the New England Bach Festival) with whom she worked closely for over a decade.