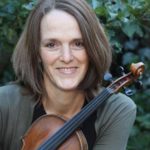 Becky’s fiddle playing and repertoire combines elements of traditional Irish and French Canadian music. She is a veteran of the New England contra dance scene and has performed and traveled widely. Becky began playing for contra dancing in Maine, bending her early classical training to the demands of dance music. Later, she studied Irish fiddling styles with Brendan Mulvihill and Eugene O’Donnel and French Canadian fiddling with Lisa Ornstein. She has been a defining presence in some of the most popular and innovative contra dance bands to come out of New England, being the fiddler for both Wild Asparagus and Nightingale.