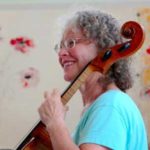 A graduate of the Curtis Institute, Judith was a founding member of the Brattleboro Music School in 1975.  She has toured extensively across the United States, Japan, France, and Canada and has played at various festivals in Switzerland and Poland. Judith began her studies in Puerto Rico with Marta Casals Istomin, then continued with David Soyer and Mischa Schneider at the Curtis Institute.  She was a founding member of the Guilford Quartet and the Hebrew Arts Quartet (later known as the Mendelssohn Quartet). She was also a member of the Iceland Symphony, in Reykjavík, and played principal cello for many years with Musica Sacra in New York City, under Richard Westenberg.  Judith has been a participant at both Yellow Barn and Marlboro Music and has performed on numerous Musicians from Marlboro tours over the years.  She has served on the faculty of the New England Conservatory Preparatory Department for the past five years, was a teacher at American University in Washington, D.C., and also teaches at the Brattleboro Music Center Music School.