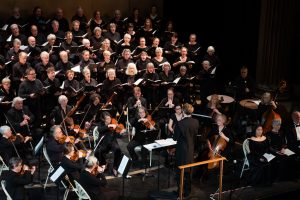 The BMC’s oldest performing ensemble, the Brattleboro Concert Choir was created by Blanche Moyse even before she established the BMC. The Choir’s repertoire has included such classic works as Handel’s Israel in Egypt, Bloch’s Sacred Service, Rachmaninoff’s All-Night Vigil, and the Requiems of Brahms, Verdi, Durufle, and Mozart, as well as contemporary music by Eric Whitacre, Arvo Pärt, Ola Gjeilo, Morten Lauridsen, John Tavener, and commissions of Nico Muhly’s Jubilate and Paul Dedell’s Divine Chemistry.

The Choir is open to all singers, of every voice part and gender, by audition. The 2020-21 season will include a virtual collaboration around racial justice with local high schools, and digital performances of favorite repertoire from the past. Singers interested in learning more about the Choir and how to get involved, or schedule an audition, should contact Music Director Jonathan Harvey at the Brattleboro Music Center (802-257-4523; info@bmcvt.org). 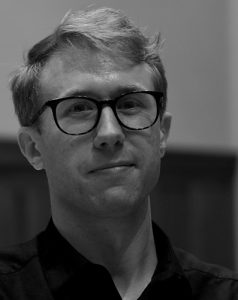 Dr. Jonathan Harvey has been Music Director of the Brattleboro Concert Choir since 2018. In addition to his work with the BCC, he is also Assistant Professor of Music and Director of Choirs at Fitchburg State University.

His commissioning projects, composer collaborations, and frequent performances of new and contemporary works are a testament to his commitment to ensuring that classical music is a living, breathing art form. Jonathan’s dedication to early music inspired his research, presentations, and recordings of the secular Latin-texted works of Venetian Renaissance composer Adrian Willaert, his published work on music of Orlando di Lasso and C.P.E. Bach, and his frequent performances of Medieval, Renaissance, and Baroque repertoire.

He has previously held music director positions with universities, community music organizations, and churches in Massachusetts, Connecticut, Rhode Island, and Indiana, and is a sought-after clinician and adjudicator. He is a member of the American Choral Directors Association, the National Collegiate Choral Organization, College Music Society, and Chorus America, is the Collegiate Chair for the Massachusetts chapter of ACDA, and serves as a board member for Choral Arts New England. He currently lives in central Massachusetts with his wife, Jessica Adamick, and their young son Wally.

And in case you missed it…

On the evening on May 6th, during the Choir’s previously regular rehearsal time, the group gathered on Zoom and sat together, in stillness with each other (and some pets) for 4 minutes and 33 seconds. This video is a recording of that experience.