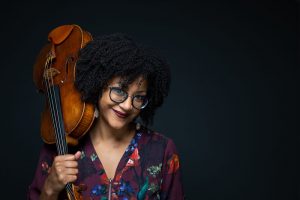 A great musician can build a rapport with an audience in just a few notes. So, imagine the connections that can be created when that artist sustains that engagement with an audience across months and years. That is the goal of the BMC Residency Program, which generates new experiences and fosters understanding between musical artists of color, local people, and our communities.

We’re delighted to be collaborating with our new Artist in Residence, violist Ashleigh Gordon, selected last summer. This accomplished and award-winning musician has recorded and performed with leading ensembles and orchestras across the globe. Among her many endeavors and accomplishments, she is an instructor of Music Artistry at the Longy School of Music at Bard College, and the co-founder and Artistic/Executive Director of Castle of our Skins, a Boston-based concert and educational series celebrating Black Artistry through music.

“The BMC community is incredibly generous and welcoming,” says Gordon. “I’ve had a great time getting to know and work with students, faculty, and staff these past few months. What I especially love about my time at the BMC is the space (and encouragement) to engage with both music performance and education across generations. I’m looking forward to the winter/spring months with more music making, workshops, and learning ahead.”

Heather Sommerlad, BMC faculty, EOS and Outreach Coordinator, explains, “Ashleigh is a whirlwind of talent, whose vast knowledge and expertise have already enriched our community. Music in the Schools and Youth String Orchestra students loved working with her, and both performers and audience members were blown away by her EOS concert. ” 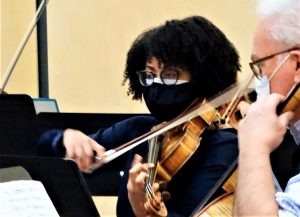 Among Gordon’s projects during the past few months: 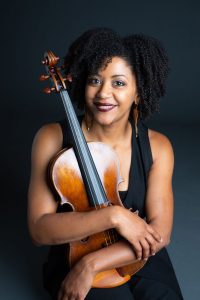 Gordon was selected as Artist-in-Residence after a nationwide search. Described as a “charismatic and captivating performer,” Gordon has recorded with Switzerland’s Ensemble Proton and Germany’s Ensemble Modern; performed with Grammy Award-winning BMOP and Grammy-nominated A Far Cry string ensemble; and appeared at the prestigious BBC Proms Festival with the Chineke! Orchestra.

She is co-founder, Artistic/Executive Director and violist of Castle of our Skins, a Boston-based concert and educational series devoted to celebrating Black Artistry through music. In recognition of her work, she has presented at IDEAS UMass Boston Conference and 180 Degrees Festival in Bulgaria; has been featured in the International Musician and Improper Bostonian magazines as well as the Boston Globe; and was awarded the 2016 Charles Walton Diversity Advocate Award from the American Federation of Musicians.

Learn more about our Artist in Residence Program.