The following wonderful musicians will be sharing their music with us in this years Festival events. 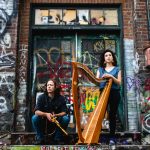 Rachel Clemente(harp) and Dan Houghton(pipes) Vermont based duo, Rachel Clemente – member of harp duo Two Shores and US National Scottish Harp champion (’16) – and Dan Houghton – member of Cantrip, Pipers’ Den and former member of Salsa Celtica – bring together an unlikely paring of bagpipes and harp. While firmly rooted in the fertile ground of Scottish traditional music, their gritty, avant-garde musical interpretations put them at the forefront of Celtic folk musicians in New England. They are both avid tunesmiths and their repertoire reflects this as it features many original compositions as well as traditional melodies. 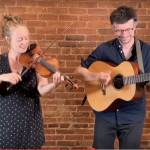 Hanneke Cassel and Yann Falquet: Effervescent and engaging, Boston-based fiddler Hanneke Cassel’s style fuses influences from the Isle of Skye and Cape Breton with Americana grooves and musical innovations, creating a cutting-edge acoustic sound that retains the integrity and spirit of the Scottish tradition. While Cassel has established herself as a leader in the contemporary Scottish fiddle scene, this year she embarked on a project with guitarist Yann Falquet to record the traditional tunes that inspired her love for Scottish music. Falquet, who has toured regularly throughout Canada, the U.S., Europe and Australia with Québécois band Genticorum, is a driving, captivating musician who helps breathe life into these old reels, strathspeys, jigs, and airs. 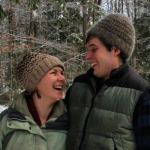 Arthur Davis and Emma Schneider: With harmonies drawn from a background in traditional, swing, and classical music, Arthur and Emma love to sing together and share songs with others. Arthur grew up in Brattleboro’s traditional music scene, toured with Northern Harmony, and is a regular contributor to singing sessions of all sorts. Emma started out singing old standards around the house with her parents and grandma and has performed in many genres from baroque to ballads. Building from their individual repertoires, they’ve been excited to explore singing together for the past several years. 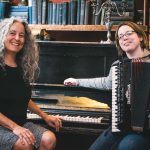 Peregrine Road: Karen Axelrod and Rachel Bell: plays captivating acoustic music that occupies a sweet spot somewhere between chamber music and folk music, with complex arrangements and lush textures alongside raw energy and multi-cultural influences. Karen and Rachel have quickly become known as a powerhouse duo capable of a huge variety of styles, in demand throughout North America and beyond for concerts, workshops, festivals, English country dances, contra dances, and other events.

Their music is rooted in Celtic, English, French, Quebecois, New England, and Appalachian traditions while at the same time being infused with the excitement of new compositions and dynamic improvisation. Audience members frequently remark on Peregrine Road’s exquisite musicianship and mastery of their instruments, as well as their outrageous humor and ability to connect with listeners of all ages and walks of life. 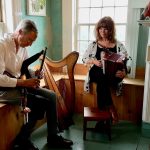 Benedict Koehler and Hilari Farrington: Founders of the Vermont School of Irish Traditional Music, uilleann piper Benedict Koehler, and button accordion and harp player, Hilari Farrington, are known across North America and Ireland as teachers and performers of Irish traditional music. Over the years, and partly as a result of Benedict’s work as a renowned maker of the uilleann pipes, their home in East Montpelier has welcomed hundreds of Irish musicians from all over the world. 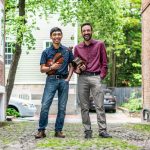 The Vox Hunters: Armand Aromin and Benedict Gagliardi: Hailing from the great state of Rhode Island, Armand and Benedict are seekers and singers of old songs, cultivators of local music, and chronic multi-instrumentalists. They are touted as strong tradition-bearers in their generation, and their genuine affinity for the music is evident in the emotion they draw from it. With a pair of oft-harmonizing voices tastefully garnished with fiddle, free-reeds, and tenor guitar, The Vox Hunters offer an all-natural connection to the living tradition of folk music. (photo by Anna Colliton) 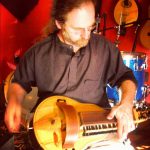 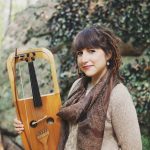 Emerald Rae and Dan Frank: Emerald Rae discovered the mythical legend of the ancient Crwth in her studies of early Scottish music. The Crwth is a rare and mysterious bowed lyre, and a precursor to the violin. She has brought the Crwth to audiences in the Boston area and beyond for over 10 years, including the Welsh Christmas Revels. She worked with the Museum of Fine Arts to restore their Crwth to playability, has been immortalized in the Video Archive of the MFA Instrument Library. She is joining forces with Dan Frank on Hurdy Gurdy, who has frequented Welcome Yule and performs with the quartet Forest Avenue. They will be performing a smattering of tunes from Brittany, Wales, and Spain. 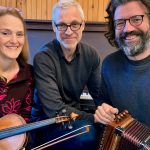 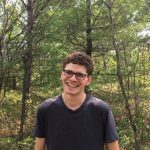 Becky Tracy and Keith Murphy have been part of bringing traditional music to the BMC for many years now. Weekly classes, summer camps, concerts and of course the Northern Roots Festival have been among their contributions to the traditional music program at the BMC. They both have deep roots in the music of Ireland, Scotland, Newfoundland, and France. But the music of Quebec with it’s distinctive melodies and rhythms has had a special place in their musical lives and strongly shaped their music in general, especially in Becky’s percussive bowing style and Keith’s piano approach.

Yann Falquet has been a leading light in the traditional music scene in Quebec, having been a founding member of the influential band, Genticorum 20 years ago. He is well known for his wide ranging guitar style which is highly nuanced even as he shifts easily between delicate and powerful playing. In this grouping, Yann focuses on his passion for the very traditional one row, diatonic accordion, an instrument at once simple but also incredibly propulsive with its distinctive bellows technique and instantly recognizable. In this past year, Yann has been basing himself in Westminster West so we are happy to be able to call him a ‘local musician’.

Eric Boodman has cultivated a most satisfying and rewarding career as an award-winning journalist, working as a general assignment reporter for STAT, Boston Globe Media’s national publication covering science and medicine. But he’s also found the time (and energy) to become a darn good fiddler, especially in the Québécois tradition. Eric has appeared at BCMFest (Boston Celtic Music Fest) with bouzouki player Yaniv Yacoby, as well as at Fiddle Hell, NEFFA, and as part of the Canadian-American party band Calico, and the Scandinavian influenced trio Triga.