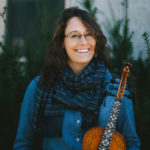 Check Out the Featured Performers at the 2019 Northern Roots Traditional Music Festival!

Dominique Dodge, a harper and singer who grew up in the White Mountains of New Hampshire, and now divides her time between Vermont and Cape Breton. She has a passion for melody-driven dance music and responsive, rhythmic accompaniment, as well as for songs, airs, and 18th century harp tunes. Her sound is firmly grounded in the traditional music and song of Cape Breton, Scotland, and Ireland.

David Surette, highly regarded throughout New England and beyond for his work on the mandolin, guitar (both flatpick and fingerstyle), and cittern. Sing Out Magazine calls him “a master player of fretted instruments; The Green Mandolin is a Celtic mandolin recording tour-de-force.” His diverse repertoire includes Celtic and New England tunes, original compositions, blues and ragtime, traditional American roots music, and folk music from a variety of traditions. As part of a duo with his wife, singer Susie Burke, they have performed regularly together for many years (30 years in 2018!), recording several albums and building a reputation as one of New England’s top folk duos.

Eloise & Co. features the combined creative force of two of the country’s most sought-after dance musicians, Becky Tracy and Rachel Bell. These two, sometimes playing as a duo and other times joined by various guest guitarists including Owen Morrison, Andrew VanNorstrand, and Bethany Waickman, crank out dance and concert music with unbridled energy and soaring beauty. Originally thrown together at a gig where Becky led the contra dance portion of the evening and Rachel led the French dance part of the evening, they have continued to fuse these two elements into their concerts and dances, as well as adding songs and original compositions to the mix. Their first recording, “More, Please” was released in July of 2018, and as its name suggests, they are already dreaming of the next recording.

Acoustic Guitar and mandolin player Flynn Cohen, who has performed all over the world with many notable acts in traditional and contemporary acoustic music. He can be seen in concert with the American folk band Low Lily and legendary Irish Accordion player John Whelan, as well as duo shows playing music from his four solo albums.

Owen Marshall has been called “a guitar/mandolin/banjo player rivaled in character only by the occasional three-pronged carrot” (Vogue 2009). Owen has performed and recorded with many of traditional music’s top acts. In addition to being a respected performer, Owen is in demand at music camps throughout New England and the U.S., where he shares his approach to accompanying traditional music.

Fiddler Jenna Moynihan is regarded as one of the best of the best in the new generation of acoustic musicians. Versatile and inventive, her playing draws heavily from the Scottish tradition but is in no way bound by it. Her prowess and subtly sure touch on the fiddle is uniquely expressive, and she is at home as a bandleader, collaborator, or educator.

Traddleboro is an annual Northern Roots Festival tradition that brings together a group of local musicians specifically for the festival. This year’s Traddleboro 2019 incarnation features local pub singers Kirk Dale, Kate Richardson, Paul Eric Smith, and Amanda Witman. Richardson is a longtime devotee of community singing, with roots in Sacred Harp and Welcome Yule.  Smith started singing pub songs with Morris dancers while in graduate school in Ontario and Witman was drawn to the rich fullness of pub songs after hearing a Revels recording. Dale enjoys the feeling of harmony singing so much that he started a new pub sing in Marlborough, NH so his friends and community could enjoy the therapeutic benefits of a good local singing session