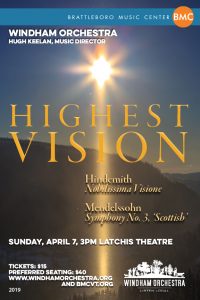 “This is a rich musical and spiritual treat not to be missed,” says Musical Director Hugh Keelan. “Mendelssohn shows us the swirling dances, landscapes, gloomy ruins and other evocative locations from his tour of Scotland; in Hindemith’s suite, we bear witness to a sublime other-worldly figure bringing sainthood into the world.”

Felix Mendelssohn’s Symphony No. 3, known as the Scottish, was inspired by the composer’s walking tour of Scotland, where he was moved by a visit to Holyrood Castle, once the home of the doomed Mary, Queen of Scots. Another of his well-known works, The Hebrides, also was inspired by the rough and ragged Scottish landscape.

Nobilissima Visione, or “The Noblest Vision,” is actually a ballet by Paul Hindemith and originally choreographed by Léonide Massine for the Ballet Russe de Monte. After the ballet premiere, Hindemith extracted a 20-minute orchestral suite, which he also called Nobilissima visione.

Keelan adds, “The growth of the Windham Orchestra is extraordinary, and to play these works so beautifully a month or so out is inspiring. Please join us to share in these two magnificent pieces played by your outstanding community orchestra.”