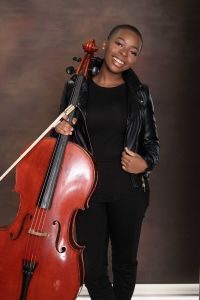 The Vermont Symphony’s ‘Made in Vermont’ chamber orchestra statewide tour continues Friday, Sept. 27, with a 7:30 p.m. concert at the Brattleboro Music Center.

The visit is especially meaningful to the BMC because of VSO Conductor Jaime Laredo’s role, with his wife, Sharon Robinson as the BMC Artistic Advisers.

The program features Ifetayo Ali-Landing, a teenage cellist from the Sphinx Program, playing Haydn’s famous C Major Concerto. She began her musical studies on the violin and switched to cello at the age of 4. Her teachers and coaches have included Lucinda Ali-Landing, Megan Lauterbach, and Martine Benmann at the Hyde Park Suzuki Institute in Chicago, as well as Tahirah Whittington, Oleksa Mycyk, and Hans Jørgen Jensen.

The VSO’s principal flutist, Melissa Mielens, will perform the Flute Concerto No. 2 by Francois Devienne.  She has been hailed in reviews for her “eloquence,” and “ethereal flute lines.” The program also will include Bartόk’s Romanian Folk Dances and the world premiere commission by Matthew Evan Taylor, The Greatest Night, as the VSO’s collaboration with the Middlebury New Filmmakers Festival continues. The work will be paired with a screening of a new film by Jeremy Lee MacKenzie.