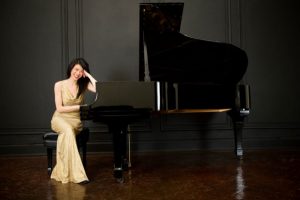 The Brattleboro Music Center’s Season Guest Concert series features pianist Jenny Lin Sunday, Nov. 10. The 3 p.m. concert at the BMC will feature the music of Philip Glass. Highlights will include Truman Sleeps, from the film “The Truman Show,” and The Hours, from film “The Hours.” Also included will be Mad Rush, Distant Figure – Passacaglia, and Piano Etudes 18, 2, 13, 16, and 6.

Jenny Lin is one of the most respected young pianists today, admired for her adventurous programming and charismatic stage presence. She has been acclaimed for her “remarkable technical command” and “a gift for melodic flow” by The New York Times. The Washington Post praises “Lin’s confident fingers… spectacular technique… “, “…surely one of the most interesting pianists in America right now…” and Gramophone Magazine has hailed her as “an exceptionally sensitive pianist.”

Philip Glass has composed more than 25 operas, large and small; twelve symphonies; three piano concertos and concertos for violin, piano, timpani, and saxophone quartet and orchestra; soundtracks to films ranging from new scores for the stylized classics of Jean Cocteau to Errol Morris’s documentary about former defense secretary Robert McNamara; string quartets; and a growing body of work for solo piano and organ. He has collaborated with Paul Simon, Linda Ronstadt, Yo-Yo Ma, and Doris Lessing, among many others.