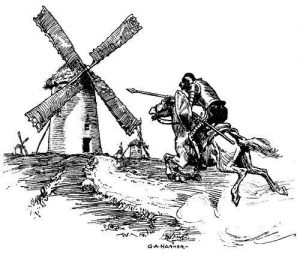 Our Season Guest Concert features the Sarasa Ensemble performing “Don Quixote, Knight Errant.” Two live performances, with very limited seating to ensure adequate social distancing, are set for Friday, Sept. 18, at 5 and 7 p.m. at the BMC.  A performance also will be streamed on Sarasa’s YouTube channel Sunday, Sept. 20, at 3:30 p.m.

Sarasa Ensemble’s opening program for the 2020-21 season, “On the Fringe,” celebrates world literature’s original anti-establishment hero, Don Quixote. This unforgettable character, created by Miguel de Cervantes, embarks on a journey in search of chivalrous adventures, such as saving damsels in distress, combatting giants in the guise of windmills, and righting wrongs. In his quest to overcome his own limitations, Quixote dreams to be what he is not—  and does not give up.

The great theatrical aspect of his heroic exploits with his trusty and patient squire, Sancho Panza, and overextended horse, Rocinante, has inspired many musical interpretations. Sarasa will present an hour-long concert of 18th-century compositions based on the tales of Don Quichotte with works by Telemann, Boismortier and Francesco Conti, including readings from Cervantes’ text.

Founded in 1997, the Sarasa Chamber Music Ensemble is a performing collective, presenting music spanning the 17th to the 21st centuries, on both period and modern instruments. Sarasa has played throughout New England, and has toured Ireland, Cuba and India. The group facilitates an award-winning outreach program with incarcerated teens in the greater Boston area.