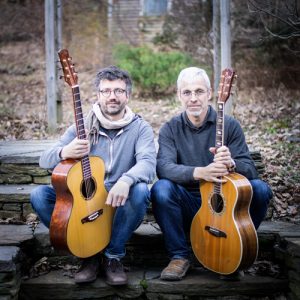 Keith Murphy and Yann Falquet are masters of contemporary Celtic guitar, representing the compelling textures, harmonies and rhythms that the guitar has brought to traditional songs and instrumentals since the Celtic music revival in the 1970s.

As singers, they bring a rich blending of the Franco and Anglo song traditions. Falquet comes with a wealth of songs from the French-Canadian tradition. He is probably best known for his work with the Quebecois trio, Genticorum, with whom he has been a driving force since the group’s inception.

Murphy is a highly respected traditional singer and brings a song repertoire filled with gems from his native Newfoundland as well as Quebec and his current home, Vermont. He was a founding member of the ground-breaking trio, Nightingale and is the artistic director of the Brattleboro Music Center’s Northern Roots Festival.

Together, Yann and Keith create a fresh new sound of open tuned guitars along with mandolin and mandola for an exciting mix of traditional songs.