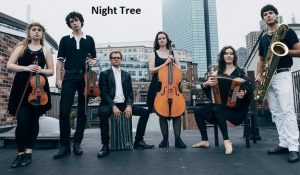 Night Tree is made up of six diverse musicians who came together unexpectedly within the walls of Boston’s New England Conservatory. The sextet attracts dramatic attention not only for its abnormal instrumentation of two fiddles, cello, accordion, saxophone, percussion, voice, and the occasional viola and mandolin, but for its collective representation and incorporation of traditions from Irish, Classical, Swedish, Jazz, Klezmer, and Afro-Cuban music.

The group, all students at NEC, were named the Conservatory’s Wildcard Honors Ensemble for 2016-2017.  Awards for this title included a sponsorship from NEC, a headlining performance at the historic Jordan Hall, and a year of working with Winifred Horan, fiddler and co-founder of Irish super-band, SOLAS.  Night Tree will be releasing their debut album Sept. 1, produced by Séamus Egan, another founding member of SOLAS.  The band began touring in Vermont at the beginning of 2017.