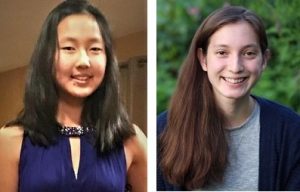 Winners of the Windham Orchestra Concerto Competition will perform with the Orchestra Monday, Nov. 4, at 7 p.m. at the Brattleboro Music Center. Concert admission is by donation at the door.

Pianists Rebekah Hong of Amherst, MA, and Zoe Mitchell of Walpole, NH, were selected among several finalists in the 33rd annual competition, held in March.

Mitchell is a home-schooled high school senior who has been playing the piano for nine years, and currently studies with Susan Dedell, a member of the BMC faculty. She also plays the violin and organ, loves to cross-country ski, and enjoys studying languages.

Hong, 15, a 10th grader, began studying piano at age five and became a top-prize winner at age six. In 2018, she won first prize at the Steinway Competition in Cleveland, and in the same year, she won the honorable mention at Lee University’s International Competition. In the summer of 2019, she was selected to go to Green Lake’s Festival of Music Chamber Camp to learn from world renowned chamber musicians for one week. Outside of classical piano, she enjoys accompanying her school choirs and playing jazz flute in the school jazz band. She studies under Jeewon Park.

The Windham Orchestra’s Annual Concerto Competition, funded in part by Cox Violins, is open to serious instrumental and vocal music students in grades 9 through 12. Eligible students must live or attend schools in the Vermont counties of Windsor, Windham, and Bennington; New Hampshire counties of Cheshire, Sullivan and Grafton; or Massachusetts counties of Berkshire, Franklin and Hampshire..