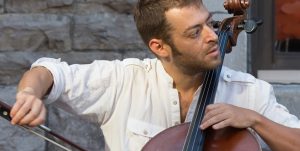 The BMC presents “Jake Charkey: The Hindustani Cello,” Friday, May 6, in a concert that includes the world premiere of a commissioned work.

A disciple of the renowned violinist Padmabhushan Dr. N. Rajam in the rare Gayaki Ang style, Charkey is one of the few cellists in the world performing Indian music on the cello. He is an eclectic improviser, drawing from his extensive training in both Eastern and Western musical traditions and is also a sought-after studio recording artist in the film, television and music industry in both India and the USA.

Accompanying Charkey will be Naren Budhakar, a versatile tabla player who has accompanied prominent vocal, instrumental and dance maestros. He has also contributed his tabla skills to varied music genres including pop, rock, Irish Celtic and jazz. Notably, he did a duet with Bobby Mc Ferrin at the “Notes and Neurons” event, has recorded with Alicia Keys, and performed a concert series with the acclaimed Alvin Ailey dance company for which he was cited in The New York Times. He has played at such prestigious venues as Carnegie Hall, Kennedy Center, The Metropolitan Museum, and the Getty Museum.

The program includes the world premiere of “Sleep and Dream Flying For Solo Cello” by Akshaya Avril Tucker, a composer who draws inspiration from the music and dance traditions of South Asia, having trained as a cellist and Odissi dancer from a young age. Commissions and projects include works for Johnny Gandelsman (Brooklyn Rider), WindSync, Marianne Gedigian, and Hindustani vocalist Saili Oak. In 2019, she won an ASCAP Morton Gould Young Composer Award.

Also featured will be a piece by Indian-American composer Reena Esmail, who works between the worlds of Indian and Western classical music, and brings communities together through the creation of equitable musical spaces.  Esmail’s compositions have been commissioned by ensembles including the Los Angeles Master Chorale,  the Richmond Symphony, Town Music Seattle,  Albany Symphony, Chicago Sinfonietta,  and the Yale Institute of Sacred Music.  Esmail is currently an Artistic Director of Shastra, a non-profit organization that promotes cross-cultural music connecting music traditions of India and the West.