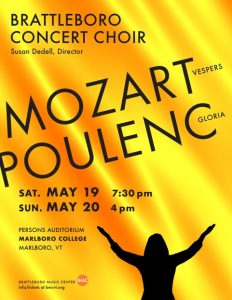 Call it nirvana, bliss, joy, or ecstasy — we all know it when it happens, and while many great compositions have elements of this wondrous state of being, there are very few that achieve it.

According to Brattleboro Concert Choir music director Susan Dedell, two of the most truly joyful works that achieve nirvana are Poulenc’s Gloria and Mozart’s Vespers, and both are on the program when Dedell takes the podium for her last time with the chorus Saturday, May 19 at 7:30pm, and again on Sunday, May 20 at 4pm.

The concerts, featuring soloists soprano Junko Watanabe, alto Justina Golden, tenor Peter Shea, and bass Charles Mays, Jr., will be held at Persons Auditorium, Marlboro College, in Marlboro. Advance tickets are $18 ($10 students) with tickets at the door at $20 ($10). For tickets or more information, contact the Brattleboro Music Center at (802) 257-4523, or online at bmc.vt.org.

“Many actors would agree that it is harder to play a nuanced hero than a villain, at least as far as the superficial presentation is concerned,” Dedell explains, “and the same is true for music. It takes a composer of musical genius and personal depth to fully portray that most sought-after, yet elusive sensation — joy.”

Poulenc’s Gloria captures, in vivid short capsules, some of the most important dimensions of joy. One of the most wonderfully obvious is the experience of pure whimsy.  Like a gleeful child, Poulenc delights in making a game out of the most unlikely materials and circumstances.  “A chorus member asked me during a rehearsal why I thought the composer wrote one section of the piece with the sections of the chorus tossing the phrases back and forth at each other,” Dedell recalls. “’Is it fun to do?’ I asked. ‘Well, yea,’ he replied.  ‘Ah, there’s the answer — it’s meant simply to be fun!’”

Another aspect of joy manifested in the Gloria is the state of unrestrained physical energy.  Says Dedell: “One of the shortest and most vivid sections of the Gloria contains music that seems like a suitable soundtrack for a crowd of happy teenage friends — they are more than a bit rowdy, but without a mean bone in their bodies.  Fun to hear, and fun to sing!”

Another powerful attribute of joy is an uninhibited connection to a sense of physical wholeness — a sensual suffusion that reaches from the warmth of our toes to the tingling of the brain. “Poulenc captures this rhapsodic state of being in the concluding minutes of the Gloria so fully that I never want it to end! But end it does, with the lightest and most loving of blessings, ” says Dedell.

Mozart’s music is often lavishly suffused with these aspects of joy, but the Vespers in this concert add another dimension of joy, one found in the true unity of all persons.  For Mozart, all personal joys are culminated in the perfect unity to be found in our common brotherhood. He believed that music should inculcate feelings of humanity, compassion, friendship, and freedom of all kinds.

Mozart’s genius allows him to be at once the most innocent and gleeful of all composers, as well as the most beautifully loving.  It allows him to portray suffering and tragedy in the same compassionate space that he portrays our human foibles.  And in the Vespers, these emotions are given full scope, bound together in the giant, resounding AMENS! that end each section.