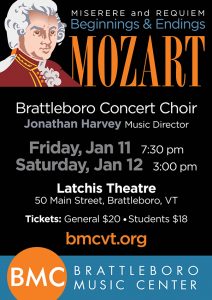 Leading the Choir will be Jonathan Harvey, an Assistant Professor of Music and Director of Choirs at Fitchburg (MA) State University, who was named music director of the Brattleboro Concert Choir earlier this year.

The two pieces on the program are beautiful bookends of Mozart’s musical life. Allegri’s Miserere mei, Deus holds a special place in the lore around Mozart’s prodigious young talent. The piece was written by Allegri in the late 1630s specifically for worship in the Sistine Chapel, where he was employed as a singer. According to legend, the piece was kept guarded there until a 14-year old Mozart visited the Vatican in 1770. Upon hearing the piece once, and being stunned by its sublime beauty, he transcribed it perfectly and brought it to the wider world.

From that early influence on Mozart, the program moves to his last and unfinished masterpiece, the Requiem. Mozart’s Requiem contains some of his best-loved and most beautiful writing for the voice, and takes performers and listeners alike on a journey from the depths of violent hellfire to the heavenly softness of angel voices.

The Brattleboro Concert Choir is the Brattleboro Music Center’s oldest performing ensemble, and was created by Blanche Moyse, founder of the BMC.