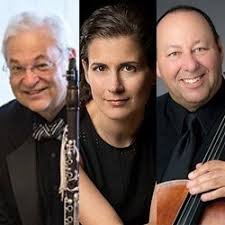 The 7:30 p.m. concert features pianist Anna Polonsky, clarinetist David Shifrin, and cellist Peter Wiley. The three have performed individually in the past for local audiences, at the Marlboro Music Festival and as part of the BMC Chamber Music Series, but their new collaboration as a trio commands immediate attention and offers the promise of a very special concert.

To open and close the program, the Trio will present two towering works for clarinet, cello, and piano. Ludwig van Beethoven composed his Trio for Clarinet, Cello, and Piano in 1797, early in his career. At this time, Beethoven was experimenting with chamber music for woodwind instruments. On the other hand, Johannes Brahms composed his Trio in 1891, relatively late in life, after he met and became entranced with the playing of Richard Mühlfeld, the principal clarinetist of the Meiningen Orchestra. The Trio will also perform Clarinet for Piano, Clarinet, and Cello (1973) by Nino Rota as well as the Trio by Francis Poulenc.