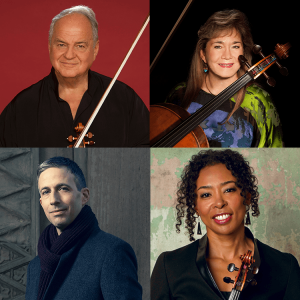 Their performance will include the Vermont premiere of award-winning composer/violist Ngwenyama’s new piano quartet Elegy. This BMC co-commission was composed in response to the tragic events of spring 2020, including the killing of George Floyd.

BMC Artistic Advisor Jaime Laredo is regarded as one of the top violinists of the late 20th century, especially notable as part of the Kalichstein-Laredo-Robinson Trio. He has also been active as a conductor and educator. Performing for over six decades before audiences across the globe, he has excelled in the multiple roles of soloist, conductor, recitalist, pedagogue, and chamber musician.

“Mother of Peace” and “Lion” in Zulu, Nokuthula Endo Ngwenyama’s performances as an orchestral soloist, recitalist, and chamber musician garner great attention. Gramaphone proclaims her as “providing solidly shaped music of bold mesmerizing character.” As a composer, Uptown Magazine featured her “A Poet of Sound.” As a performer, she gained international prominence by winning the Primrose International Viola Competition at 16. The following year she won the Young Concert Artists International Auditions, which led to debuts at the Kennedy Center and the 92nd Street ‘Y.’ A recipient of the prestigious Avery Fisher Career Grant, she has performed with orchestras and as a recitalist the world over.

Also serving as BMC Artistic Advisor, Sharon Robinson is winner of the Avery Fisher Recital Award, the Piatigorsky Memorial Award, the Pro Musicis Award, and a Grammy Nominee, and recognized worldwide as a consummate artist and one of the most outstanding musicians of our time. Whether as a recitalist, soloist with orchestra, or member of the world-famous Kalichstein-Laredo-Robinson Trio, critics, audiences, and fellow musicians respond to what the Indianapolis Star has called “a cellist who has simply been given the soul of Caruso.”

Benjamin Hochman, pianist, is a musician of exceptional versatility who regularly appears in multiple guises as an orchestral soloist, recitalist, and chamber musician. In recent years he has ventured into the orchestral repertoire as a conductor. His wide range of partners and projects is matched by his curiosity, focus, and ability to communicate deeply with audiences. Since his Carnegie Hall debut as soloist with the Israel Philharmonic under the baton of Pinchas Zukerman, Hochman has enjoyed an international performing career, appearing as a soloist with the New York, Los Angeles, and Prague Philharmonic Orchestras, and the Chicago, Pittsburgh, San Francisco, and Jerusalem Symphony Orchestras.