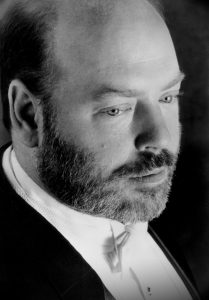 Under the direction of Mary Westbrook-Geha, the Chorale has selected four cantatas which Sylvan sang during more than 20 years of warm affiliation with the Chorale and with the New England Bach Festival and Marlboro Music Festival. Sylvan died suddenly in January 2019 at age 65.

“He was the truest singer of his generation,” wrote F. Paul Driscoll in Opera News. “The most powerful element of Sylvan’s singular magic was his purity of intention, which allowed him to sing everything with startling, uncompromising clarity.” Jonathan Blumhofer of The Arts Fuse wrote, “Sylvan’s impact on his field was immense and broad, be that as muse, performer or teacher.”

The Chorale and orchestra will be joined by vocal soloists Hyunah Yu (soprano), Steven Paul Spears (tenor), Katherine Maysek (mezzo-soprano) and Nathaniel Sullivan (bass). From 1998-2004, Yu and Spears often joined Westbrook-Geha and Sylvan as soloists at the New England Bach Festivals and Marlboro Music Festivals. Maysek and Sullivan were students of Sylvan.

In a 2001 interview, Sylvan spoke of the significance of his work with Blanche Moyse, which he said was among the most influential in a career that included work with Pierre Boulez, Christoph von Dohnanyi, Christopher Hogwood, James Levine and Simon Rattle, not to mention frequent collaborations with Peter Sellars and John Adams. “She was kind of a musical godmother to me,” said Sylvan. “Blanche was the standard for all of us. … She got to the bottom of it all, all the time, and she expected you to go there with her.”

The Blanche Moyse Chorale, a program of the Brattleboro Music Center, is an auditioned chamber chorus of about 30 singers, drawn from the Brattleboro area and beyond. Director Westbrook-Geha has brought to the Chorale her expertise in vocal technique and her strong background in the music of Bach, having sing mezzo-soprano and contralto roles for many years at Boston’s Emmanuel Church, the Marlboro Music Festival and the New England Bach Festival.

Tickets may be purchased from the Brattleboro Music Center at 802-257-4523, online at bmcvt.org, from any Chorale member, or at the door. Tickets are $22 in advance, $25 at the door, and $10 for students. These performances are sponsored by Vermont Public Radio and the Vermont Arts Council.