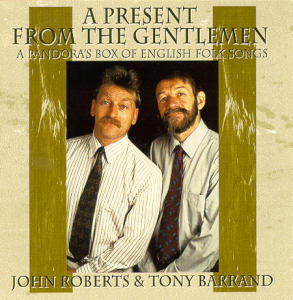 In September 1969, John Roberts & Tony Barrand, graduate students at Cornell University, performed their first concert together as folk musicians. Singing informally at the Fox Hollow Folk Festival earlier that summer, they had met the redoubtable Maggi Peirce who hired them for her coffeehouse concert series, the Tryworks in New Bedford. With friend and supporter Mark Phillips (who owned the car!) they made the trek from Ithaca to New Bedford, marking the beginning of a long career.

In the following decades the duo has played all the major folk festivals and venues, and become recognized on both sides of the Atlantic as the leading ambassadors of traditional English folksong in the USA, releasing over a dozen CDs, plus a half-dozen more with the quartet Nowell Sing We Clear. Now, to celebrate their 50th anniversary as a folk-singing duo, John Roberts & Tony Barrand present this special concert which will feature many of their favorite and most popular songs from across the years.